No, ergs don't yet float, but some of us do, and here's where you get to discuss that other form of rowing.
Locked
161 posts

PaulG wrote: Thanks to Alissa and Dougie I can post these pictures.

My pleasure. It was well worth it. I'm so jealous of the lovely location you've got.

You're a wonderful photographer, and we're lucky you're willing to share with us (and go to the trouble to do so!).
Top

Great photos! They really make me miss living near the coast. However, did you intend to send duplicates? The first and third are the same - everyone is still in the same position but the pictures have different titles, both of which are appropriate. Is there a third photo that got switched?

gregsmith01748 wrote:Paul: Those pictures are so pretty they should be framed! By the way, your stories about open water also wonderful. They have rowing have me thinking of ways to convince my wife that I need 2 boats. One for rivers and another for open water. The races sound like a blast.

What kind of open water boat would you recommend to someone who rows a smooth water scull? The one's I have heard of are Maas Aero's, Pinert Dolphins, Echos and Aldens. Is there one kind that is more popular in the massachusetts area than others?

My wife took most of those pictures. She's the artist. I'm the rower.

Of course you need two boats. If you can row a smooth water scull, getting into something like the Peinert Dolphin or the Maas 24 (?) should be easy for you. The Peinerts are made in Mattapoisett Mass and the Maas boats are made on the west coast. As a result, the Peinerts are more popular on the east coast. Both these boats do well in open water races and are classified as Class 1 open water sculls. I have been in a Maas Aero and it is a fun forgiving boat to row and does well in open water races. It is a Class 2 boat along with the Peinert Zephyr. The Echoes and the Aldens are more of the ATV of the rowing world; they will go through anything. They are Class 3 boats based on the ratio of length to width. Little River also makes an open water boat. Send me a PM and maybe we can meet for a row in my Echo on the Merimack in the spring.
Top

My pleasure. It was well worth it. I'm so jealous of the lovely location you've got.

You're a wonderful photographer, and we're lucky you're willing to share with us (and go to the trouble to do so!).

My wife took most of those pictures. The problem I was having is that Flickr and Photobucket were trying to think for me. I could not post them by simply right clicking on the image and then copying the URL in between img and img. And then Google+ resized them for me. On Photobucket I had to use an option from the menu on the right side of the image to post them and believe me it was intuitively epipelagic. (marine biology joke)

Great photos! They really make me miss living near the coast. However, did you intend to send duplicates? The first and third are the same - everyone is still in the same position but the pictures have different titles, both of which are appropriate. Is there a third photo that got switched?

No I did not mean to post a duplicate, I was just so happy to be able to post anything. This is what I meant to do:

Thanks, Paul. Another great photo!

That's my Echo between Water Lily and the wooden boat.
Top

PaulG wrote:A few photos from the race. Me on the beach: 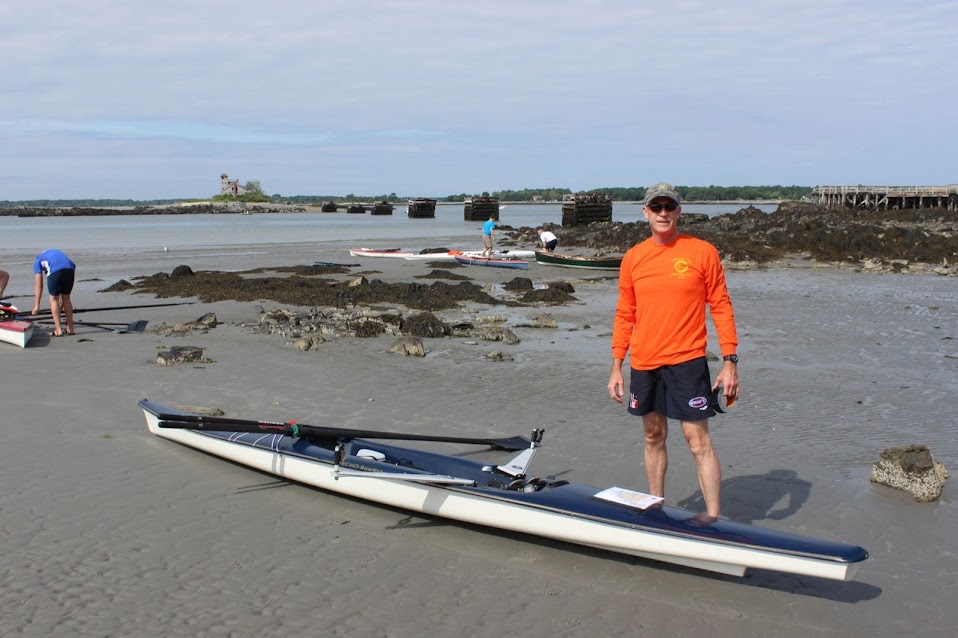 And anyone who wants a high visibility shirt just like it for Christmas should see Rick's store, Yankee Runner, in Newburyport Mass.
Top

Bare trees reflected in cold still waters,
The shoreline in December.
The Merrimack sleeps in cold water and dreams of July.

Merry Christmas and happy rowing to everyone.
Top

'Merrimack' is an Indian word meaning 'Swift Water.' Depending on the tides, of course.

Thanks for posting all those greatb pictures Paul.

The open water season will soon begin, just after the ski areas close. Rack space for your shell is available in Haverhill Mass steps from the Merrimack. Let me know if anyone is interested.

I am 6'10" (38" inseam) and I would like to row. Has anybody out there encountered very tall rowers. What do they row?

Could adapt a modest seaworthy vessel by either using track and foot stretcher of my extra-long concept2 rower or by having track and rigger made.

I would be willing to pay someone to adapt a boat for me. I live in Boston, MA.
Top

Following the cold spring of 2014 I hadn’t participate in many open water races this spring and summer. I missed the Essex River Race in May because I had not been out on the water yet and did not want my first row of the year to be a race. But now that it is September, the open water race season is gearing up and I participated today for the first time in the Minot’s Light Roundabout in Cohasset MA, put on by the Cohasset Maritime Institute.

Last night in the lower Merrimack River Valley there was torrential rain and thunderstorms so when I woke up I thought the Roundabout might be cancelled. But the weather was better on the South Shore so down we headed to Cohasset. The conditions were beautiful on the starting location at Sandy Beach. Offshore we could see historic Minot’s light. Quoting from Wikipedia:

“In 1843, lighthouse inspector compiled a report on Minots Ledge, showing that over 40 vessels had been lost due to the ledge from 1832 to 1841, with serious loss of life and damage to property. The most dramatic incident was the sinking of a ship with ninety-nine Irish immigrants, who all drowned within sight of their new homeland.”

I believe Thoreau wrote about this tragedy and there is a Celtic cross erected in nearby Scituate MA to their memory. Although the weather was not nearly that bad on Sandy Beach, the wind was rising ominously as we all paddled out to the start line. We started out in a moderate cross chop and I assumed a good position in the lead group as we rounded the first mark and headed for Minot’s light. The course went between a red nun and a race mark and I drifted a little too far to the south. Do you know how many red nuns are off Sandy Beach? Apparently one too many and I picked the wrong one and had to make a major course correction that took me out of contention for the lead.

As we rounded the second mark and headed for the Light, the waves rose and I had trouble keeping a rhythm. Actually I had trouble keeping the oar handles in my hands and the blades in the water as several times waves from starboard knocked the oar out of my hand. Forget all that stuff about holding onto the oars lightly; I needed a death grip to make any forward progress. I noticed that several boats seemed to have already made it to the turnaround and were headed back in. Well, good luck to them, I was going to finish my race. It really wasn’t much fun as I struggled with the cross chop and clawed my way back to the lead group. However I was consoled by the assumption that my Echo could take any wave conditions and no way would it tip over. I tested that assumption later.

We reached the turnaround buoys near Minot’s Light Ledge and I started back in trying to surf the confused seas. Confused? These waves had full blown identity crises as you could not tell where they came from but they all seemed to want to end up in my boat. There seemed to be 5 foot waves rising out of nowhere as the tide, wind, and ledges conspired to make unpredictable conditions. Then as I surfed down another unpredictable wave, the predictable happened. My port oar caught a crab and I could not get it out of the water and away from my chest. Actually I think I caught a crab, lobster, and a halibut as I turned to port into the trough. With my weight in the bow I buried it, and fell elegantly into the wave. Yes, you can flip an Echo.

I’ve always said that swimming in New England in September is great fun and I had a chance to experience it again as I climbed back into my boat. I took a deep breath, told the crash boat that I was OK, and started again slowly. After a few strokes I put my feet back into the straps and the self –bailer started to empty the boat. The conditions weren’t much better and with 5 minutes I did the same thing again. The port oar was buried, the handle was in my chest, and I turned to port and flipped. Over the years I’ve learned a few things about falling, primarily through skiing. Don’t fight it. Go with it, pick yourself up and start again. With my recently gained experience I was back in the boat quickly and rowing again, this time with the crash boat suspiciously following me.

From here on in it was no fun. I just wanted to finish and ignored the other racers with the exception of a fellow rower who also went over. The crash boat was there in seconds and she was all right. As we neared shore the waves and wind abated and I was able to pick up speed and passed a few people. Another navigation error near the finish line delayed me but I finished and I was glad it was over.

On the beach we all shared stories about the unpredictable waves and a shark sighting. I attended the awards ceremony out of politeness for my fellow rowers and was shocked to be awarded second place in the ocean scull division. Remember all those people I thought had already rounded the turnaround mark? They were the smart ones because they turned early and abandoned the race!
Top
Locked
161 posts

Return to “On The Water”