A member of an indoor rowing team or club? If so, this is the place for you.
Post Reply
2346 posts

Slothful1 wrote: ↑
February 5th, 2020, 1:03 am
Either way it will be an experience, and the main goal is to finish, preferably sub-8.
Good luck on Friday, Lindsay! Will look forward to reading your race reports for a bit of motivation.
Dave

Thanks Dave
well done in paris (and Ewen and Rick as well!)

if you missed it in the other thread

NZ masters games are in Dunedin this year (alternates with Whanganui) - used a visit to a local niece to get a few races in
Nice day - 60/80 people with some good performances (best was a 6:11 in the 50+). It was in an open marquee in the centre of the city which worked well. For me 5 races from 1:00 to 4:30 and then a relay to finish so a good afternoon's work though no massive times of course

jackarabit wrote: ↑
February 8th, 2020, 3:50 pm
Pic of our skipper in action at Paris. Had to rewind and squint to find him in the fugitive heat of the big 40-49 mhwt field run concurrent with the 40-49 flwt race. Got a screenshot of the “Waterbury Ice Scraper” also. Panning coverage of 70-75 mlwt much better than of Dave’s race. 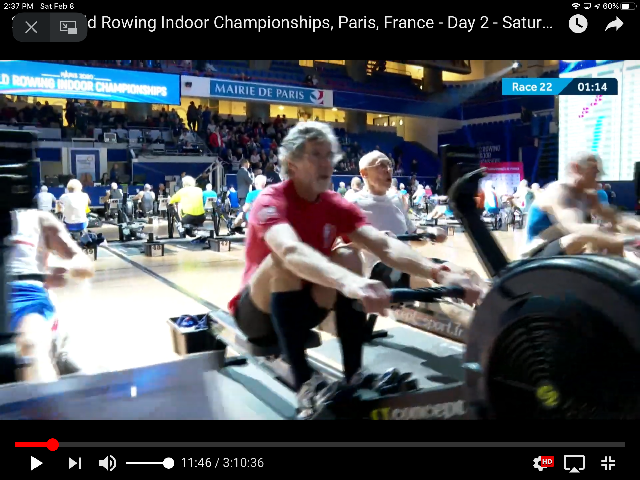 Thanks for that Jack. And let me reiterate the sentiment that it was great to meet face-to-face with our Fearless Leader (Dave) and Ewen! I've got a photo of the three of us together after the racing but can't figure out how to post it. I'll try it on Facebook for those follow us there.
Top

It was great meeting Rick and Dave in person, and "real" races definitely have a different feel than yanking on a chain in your garage.

That is so cool that y'all could do this! Must be a ton of fun!
Cynthia P.
Top


Interestingly the 65+ in Paris was slower than mine in Dunedin!

C. Cooper might be thinking similar.
There are two types of people in this world: Those who can extrapolate from incomplete data

Well spotted, Jack! My wife mentioned that the footage was more focused on the 40-49 Women's race, as they were on the first row of ergs, while we slow men had to make do with the back side of the arena. She spotted the orange shirt bobbing back and forth a couple of times. I learnt from the experience of BRIC in 2018 where I chose a blue shirt not realising that the marshalls were all dressed in a similar shade

As mentioned by Rick and Ewen it was great to manage to meet some of the virtual team for the first time.

Overall it was a worthwhile experience, despite taking about 23 hours from leaving my front door to arriving at my Paris hotel on Friday afternoon, and then having to reverse that all on Sunday to be back home by Monday lunch to prep for work on Tuesday. It didn't help that they cancelled our Sunday morning flight out of Paris because of Storm Ciara approaching Heathrow. Discovered that on Saturday night, so threw me in a spin because my daughter and I were supposed to be meeting my parents and siblings for lunch in London. Quick purchase of Eurostar tickets got us back on track, but we nearly got blocked at Gare du Nord because I didn't realise my daughter's transfer visa was meant to be for Heathrow only. Fortunately some Border Control common sense prevailed given the special circumstances and they waved us through.

I did a 7:54.9 about a month ago, so I was fairly confident of sub-8, and was happy to settle for last place just to say I was there. I was impressed by the buzz of the venue with a lot of hype, dual English / French commentators, loud music, flashing lights and interesting races to watch before mine. Managed to catch Rick looking smooth and steady in the first race of the day, but couldn't move close enough to cheer him on because I was blocking a seat in front of erg 68 so that my daughter would have a prime spot to video my race. About 30 minutes before go time I stripped down to the racing kit, and headed off to find a bathroom before jumping on a warm up erg. I could feel the butterflies already, and the heart rate was about 30 bpm above normal as I started my warm up. Fortunately I was expecting this after the same happened at BRIC, so not too concerned. Went through my standard warmup and then snapped a pic of my monitor for the logbook, but making sure I "accidentally" got a fanboy snap of the Pavel Shurmei mountain getting ready to warm up across from me. I'd just wrapped the warm up when the call came for race 28 to assemble. Off to the holding area for 10 minutes of standing on a number 68 sticker, taking in the aroma of multinational sweat all around me. Then everyone filed into the arena in order of number, and it was off to set up the erg and get ready for some fun!

I'd just finished the final set ups when the call came for handles down. Heart rate still ridiculously high, and the legs weren't feeling particularly lively, so this was going to be a struggle. It doesn't help that part of the start routine includes audio of a heart beat while they go through the "Sit Ready" / "Attention" / "Row" sequence!

I set off with a couple of strong strokes, and then settled quickly into the target 1:58s and 1:59s, although I saw a few too many 2:00s and 2:01s occasionally pop up. I didn't look to be coming last, and it did look like I could haul in the guy above me, so I decided to sit on the original plan, and then see what I had left at the end if I needed to wind it up. Things started feeling a bit heavy in the middle, so it was a pleasant surprise when I looked up to check on my daughter and saw Rick bellowing encouragement from the stand in front of me. Definitely helped lift the spirits, and keep me focused on the result! I'd managed to get ahead of the guy above me (he faded based on what I saw of the results), and then considered going after Roberto Beretta. I thought the name seemed familiar, and afterwards I found out I'd beaten him by a few seconds in London in 2018. Clearly his training stayed on a better trajectory than mine because he improved over London by 7 seconds and I slowed by 0.9. I gave it a solid push from just under 300m out, but it didn't look like I would catch up in time.

Happy with the 7:51.9 in the end - season best by 3 seconds, and a few other boxes ticked on the day. Also discovered afterwards that one of the lightweights in race 30 didn't make weight and got pushed into our classification with a 7:52.0, so my late push kept me in 115th out of the 119 finishes. 2nd-placed South African on the day Then it was a quick chat with Rick before we went off to find a spot to watch Ewen get a top 10 in the real Men's 40-49 race (and a French National medal). And finally a chance to get a semi-sweaty team photo after his race before a quick chat and then we all drifted off to make the most of the rest of the short trip to Paris. I had my doubts on whether I should go, but very happy I followed through in the end!

NZ masters games are in Dunedin this year (alternates with Whanganui) - used a visit to a local niece to get a few races in
Nice day - 60/80 people with some good performances (best was a 6:11 in the 50+). It was in an open marquee in the centre of the city which worked well. For me 5 races from 1:00 to 4:30 and then a relay to finish so a good afternoon's work though no massive times of course

Interestingly the 65+ in Paris was slower than mine in Dunedin!

That's a busy afternoon, well done! All the times there I could only dream about on a standalone basis, let alone as a sequence of events in the same day.

Interestingly the 65+ in Paris was slower than mine in Dunedin!

Great writeup and pictorial, Dave! On the day, on the line, sweating palms pounding hearts reality of erg racing! And absolutely nothing “virtual” in the prep, logistical difficulties, health challenges, and turned out pockets either. Our little team @ Paris 2020. Gottaluvit! Glad to see the three of you home and dry.
Last edited by jackarabit on February 14th, 2020, 2:24 pm, edited 1 time in total.
There are two types of people in this world: Those who can extrapolate from incomplete data

@lindsayh: Thanx for the heads up on the CTC 1 day memorial. I’ll add it to 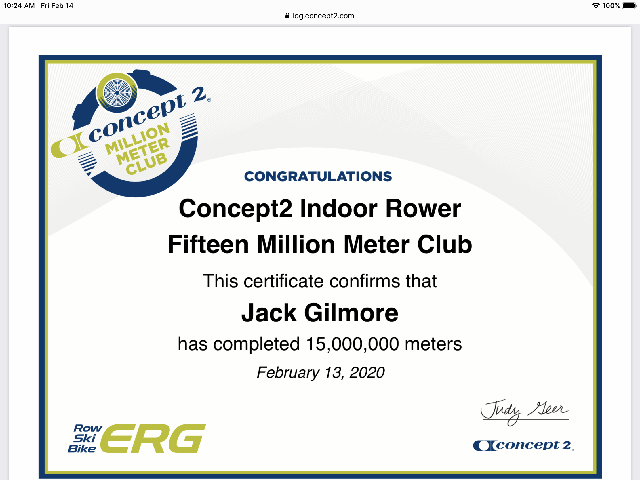 CTC IMO Carole McNally: FF#1 away, no spares. Still time to fill another. 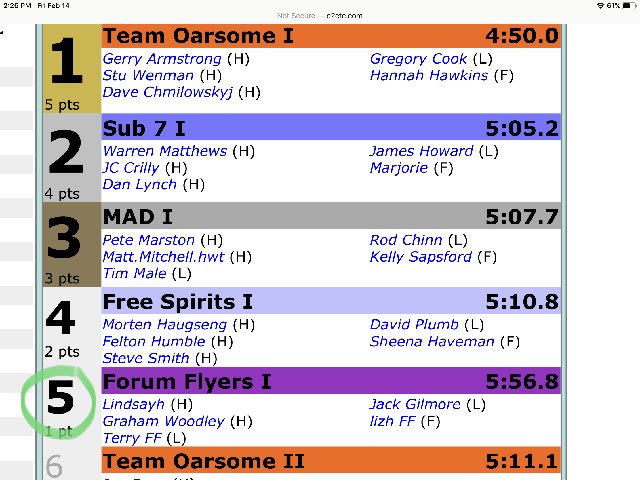 Great milestone, Jack! That's some serious metres, and not over a long time either I think.

I can't picture 15,000,000 metres, but it's around 9320 miles, about the distance between London and Cairns, Aus. Assuming you rowed the great circle route via Russia and China, which would be tricky, but hey, puts some perspective on it!

Thanks for the tickle, Dave and Graham. Every picture tells a story don’t it. I started on the erg after retirement. I can’t imagine this time investment for anyone working 40-60 hrs per week. I do know of one Flyer member with 30MM+ lifetime meters. I think he took up the erg well before retirement age. Come to think of it, I did a lot of road cycling in the 90’s to the tune of 4k miles per yr. from Wednesday nite traffic jamming and weekend club rides. I don’t remember having a social life outside cycling but I did manage to fit in six and even seven day work weeks some years.

Some of this meter munching was, in retrospect, sheer sillyness—770k meters during the 2016 VTC. Less volume and more training directed to specific goals would have been a better choice I know. So I’m getting my C2 rowing shorts for 15MM but have reduced rowing days and daily average meters in the 2019 and 20 seasons. I hear the seventies are the new fifties. Hasn’t been my experience exactly. The struggle is all.