What Training Have You Done Today?

General discussion on Training. How to get better on your erg, how to use your erg to get better at another sport, or anything else about improving your abilities.
Post Reply
33320 posts

30mins today after a 7 day timeout! I had thought about easing my way back in gently with a 2:07 pace sesh... clearly that never happened here

A real good workout, and happy to be back on it 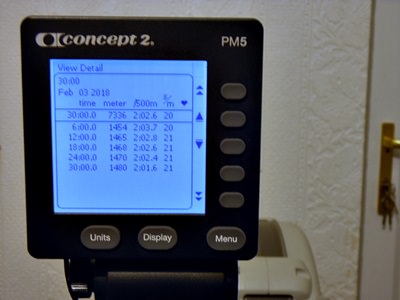 Then some back stretching on the Inversion Table. Some of the benefits of using this table regularly are wonderful! It helps you stretch, decompress, and relax muscles and spine. Helps to eliminate the back pains and aches, has positive impact on digestion and immune systems, improves blood circulation & lung functions, improves posture, reduces the stress.
42yo male 5'10 78kg (Rowing since june 9th 2016) PB's 5k 19:22 30min 7518m

The struggle itself toward the heights is enough to fill a man's heart. -- Albert Camus
Top

Some great training guys, and I missed your recent great 10km Stu too.

I really wasn't looking forward to this HM. I've had a lack lustre week of training, tired, ill kids, work leaving parties (hiccup) etc. Anyway, stopped a couple of times for water and a quiet word, but managed to break 1:25:00, just. So, I'm pretty happy, all things considered. Next target 1:23:00...

My wife is interested in the BikeErg, myself a SkiErg, there's only one way to find out...

To save hours of hunting and pecking to type a forum friendly race report, here's an email I sent to my non-rowing bike buddies.

A World away from bike racing, but very fun! I’d never been to the Aquatic Center, what a nice place. It was bustling with lots of energy from all the young rowers everywhere (also insanely loud when cheering their teammates!).

I was bummed to have to race the heavyweights, because size can be a pretty substantial advantage. I could have raced lightweight in Belmont tomorrow, but didn’t want to make the drive. So heavyweight it was.

I arrived nice and early to check out the scene. Got signed up, then asked them to weigh me, even though I knew no one cared I was a lightweight - I just wanted it noted for posterity

They gave me an ‘old’ man wrist band (Seniors 30-39, masters 40-49, veterans 50+) and a bright orange lightweight wrist band. Cool. At least a little recognition for the two of us taking on the behemoths. There were 16 rowers total in my heat, 10 were veterans.

The racing took place in the loft of the boat house, while downstairs they’d set up two TV screens showing the rowers, and two screens showing our virtual boats speed through the 2,000 meters for the audience.

They had plenty of ergs to warm up on down stairs, and there was plenty of time, so I was able to complete my structured warm up. I’ve been using Fletcher’s 2K race warm up for a 1:46 pace in training, and did exactly that for the race. As soon as as the veteran women finished they opened the gate so we could access the loft. Up the stairs the 16 of us went to find our assigned ergs. I was on the far end, second row back, near an open door - ah… a slight breeze on an unseasonably warm day.

Ergs were assigned by forecast finish time for the combined 3 groups. I was placed on erg 6 (I finished 5th overall). There was no one to my left, the guy on my right had forecast the same finish time I had. I told him I was new at this, he said "just remember to pace yourself”.

“Oars up! Then three other commands that totally went right by me in the excitement of the moment, and we were off. There were also two huge screens upstairs so that we could see our virtual boats.

Now, most guys blast off insanely fast. As a veteran of thousands of intervals and time trials, I had other plans. I’d broken the race into four 500m sections, with pace targets for each (1 second over goal pace the first 500, goal pace the next 1000, 1 second under goal the final 500). It took me all of the first 500 just to slowly pull my pace down to target. While I pretty much ignored the virtual boats on the screen, I did peak early to see that my neighbor had jumped substantially ahead of me. 'Ignore it, stick to your plan’.

My goal pace was faster than my PR set two weeks ago, so I was concerned I’d flame out. I’d done 7 practice 2Ks in the last 6 months, and knew all too well how devastating an overly optimistic pace could turn out. But, I’d tapered, I’d done 5 VO2max workouts in the last two weeks (I’d done no Vo2max on the rower since starting 8/1/17), and there was the hoped for competitive boost.

I stayed right on target, feeling in control and holding my form the entire distance. I could hear some of the big young guys finishing in impressive times, but felt strong in the last 500, so was consumed with bringing my pace down. Also, with about 700 to go, out of the corner of my eye I glimpsed my neighbor start to lose his form. This prompted me to glance at the screen to see I was now a few meters in front of him.

Totally spent, now all I had to do was navigate down the stairs without collapsing. My quads were toast! While many of the guys took the rear stairs out, I got to go down the front stairs and ring the ‘PR’ bell for the audience, how cool is that!?!

Once the results were tallied, I went to see how I’d done. WHAT? I’m not even listed in the results. Oh… wait… what’s this? Apparently the organizer had taken pity on the two lightweights and scored us separately. Cool! A Gold medal in my first race (my time placed me 2nd in the heavyweights - but they wouldn’t give me the silver for that

@VeloMark - enjoyed reading about your day; v well done on the PR too!

Wow mark! Congrats on the PB! That is a solid time, and a very strong position in a field of heavyweights!
Probably 75kg 6ft 4inches

@Mark, really interesting read and really well done on the PB and medal. Your training has really worked.

"You reap what you row"

It is certainly a good bit of kit. We spend so much time in the rowing position, and even sitting down in general (all not ideal on the spine and back) That i thought it made complete sense to have this piece of equipment. They are also dirt cheap to buy, new

I think I must be hard-wired for monotony - I just don't seem to get bored of this!

"You reap what you row"