From the CRASH-B's to an online challenge, discuss the competitive side of erging here.
Post Reply
28 posts 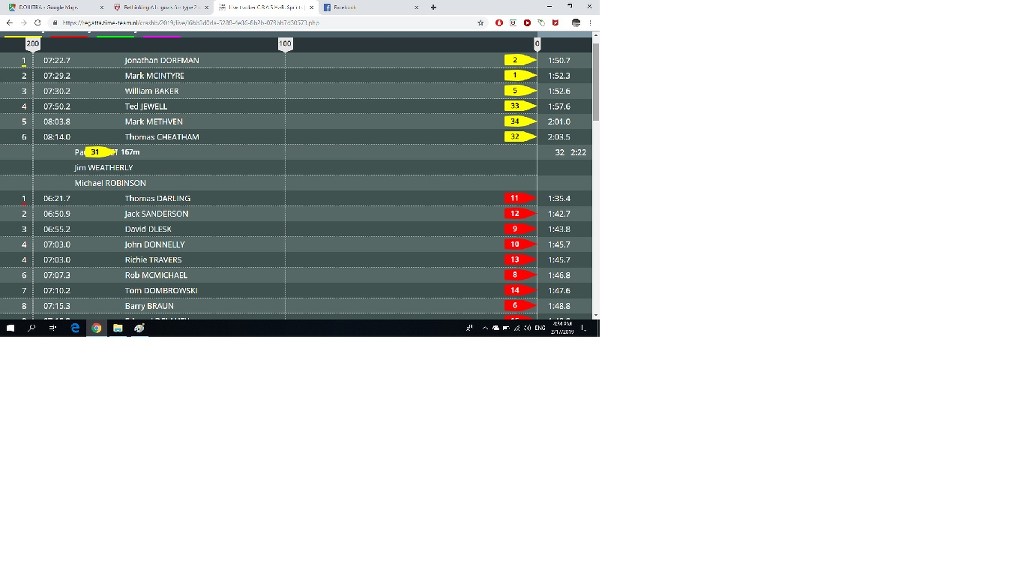 US Para rowing coach Tom Darling just smashed one of the oldest 2k records on the books, set by the great Paul Hendershott back in 2004....

"You reap what you Row"

You could see that record coming, but still very impressive. Lost only 9 sec in five yrs. Now holds 2 WRs. Barring injury, the 65+ WR will be his in five yrs.

His record may not last long ... he's entered in the World Championships in Long Beach next week.

Then again, he may have some competition next year as Ken Gates turns 60. Darling was only 3.4 seconds ahead of Gates at CRASH-B.

But all said and done it was a fantastic row.
Stewart MH 62.9 https://log.concept2.com/profile/4926
Started rowing at Cal in 1975 and rowed competitively for the next 10 years. Still follow the sport religiously. "Remo" is latin-ish for "the Rower" or "to row".
Top

On the other hand, Long Beach is four time zones away in terms of travel and the event is just a week after what obviously was an all-out effort. I hope he does go faster there, but I wouldn't be too surprised if he doesn't.

A few of us will have a chance to do something about the 65+ record before Tom and Ken get there. And some of us haven't quite given up hope regarding the 60-64 record either....

Tom is an obvious total stud. He won Head of the Charles and Head of the Schuylkill this year (60+ 1x); the number one and number two head races in the country (possibly the world). He started several minutes behind me at HOS and my only though was "stay out of his way and don't mess up his race".
Top

I've been off the forum for awhile.....anyone happen to notice Mike Caviston pulling 6:51 as a 50+ LWT in Cinncinatti a couple of weeks ago. Not a world class time but certainly very respectable. Wonder if he's getting seriously back in the mix. And the ever present (non-present?) Ranger continued his string of donations with a DNS at the same event.
Top

His 10K is extremely impressive too. Inspirational.
Top

One lesson I get from Darling's WR is that those of us who have come to rowing late in life don't stand much of a chance against those who have been rowing at a very high level for decades. Perhaps, it can be done, but the climb is extremely steep.

I think I saw where Steve Krum is entered in the WRIC at age 65. Watch out 65+ WR of 6:39.5. The current WR holder Chris Cooper is also entered. A real curiosity is that a R Cureton is entered - amazing.
JimG, Gainesville, Ga, 73.
Top

You're dead on regarding OTW rowing. The sport is so full of nuance and detail. My erging has fallen off substantially due to zero erg training from April to Thanksgiving and to be honest I just don't have the desire to go as deep as necessary to pull a good time. And.... getting older comes with a price. My best time in a competitive event from 2015 was 7:05.3. Last season my best at Center City Slam was 7:18.0. This year my best in training so far is 7:22.1. Last week I won the 60+ again at Center City Slam with 7:28.0; certainly a very average time. And there were some other issues I won't get into right now. The other two guys were serious rowers and the one gentlemen looked extremely fit. The bottom line is most OTW rowers simply are not serious about the erg. The boat has been a real challenge for me. I've done better in the head races, the rates are lower and fitness will carry you. The sprints I've been getting beat up in. My best to date was 4th of 6 with a 3:53 (with some strong current); a fairly fast time. The guy that won my race was Mark Malone who finished 2nd to Darling at Head of the Schylkill. The guy that beat me by 8s for third was the world lwt 60+ champ in 2017. But as you mentioned Jim; don't think I can ever catch these guys. I still work 60 hour weeks and that only leaves so much time for training and recovery.

But..... I consider myself blessed. No real health issues, I'm still fit. And I really like the fact that some of the best masters in the world are rowing right here. And it's really about the process. And sooner later I'll get a 3rd place; then maybe a 2nd. Who knows?
Top

FISA and/or the race organizers in LB decided that the age categories for masters don't depend on birthdays:


Competition age for all competitors is based on the current calendar year, i.e. age as of December 31, 2019.

This rather bizarre rule change affects people like my good friend Steve who are in the last year of a C2 record category. He is 64 and turns 65 later in the year. This puts him in the WIRC 65-69 race, where as you suggest he might well row in the low 6:30s and win. But if he does, and Chris Cooper will have something to say about it, he won't simultaneously break the listed record because the record criteria use age on the day of the row. Alternatively, Chris (or someone else who's 65 as of race day) could break the WR but not win the race. WTAF.

If Ken Gates were entered, which he's not, he'd be in Tom Darling's 60-64 race even though AFAIK he'll still be 59 as of the day of the race.

I did not realize that Krum was not actually 65. I checked earlier this yr with Concept 2 about the new categories for racing and was told that actual birthday was still the criterium for WRs. So Krum will have to figure in another yr of aging as far as 65+ WR. Might be close. OTOH, Darling is looking almost like a shoe-in in five yrs barring injury.
JimG, Gainesville, Ga, 73.
Top

Edward4492 wrote: ↑
February 18th, 2019, 3:52 pm
I've been off the forum for awhile.....anyone happen to notice Mike Caviston pulling 6:51 as a 50+ LWT in Cinncinatti a couple of weeks ago. Not a world class time but certainly very respectable. Wonder if he's getting seriously back in the mix. And the ever present (non-present?) Ranger continued his string of donations with a DNS at the same event.

As I related in a recent post, rowing for me these days is primarily cross training as I compete much more frequently in running and other events. But it had been six years since I competed on the erg so I decided I'd attend a few races this year, especially since the World Championship in Long Beach is not far from me. But my rowing meters are significantly less than when I competed regularly in my 40s. I actually went to Cincinnati for a two-fer. Two hours after the Cincinnati IRC, I was in the Carew Tower participating in the Fight For Air Climb:
https://runsignup.com/Race/Results/5552 ... perpage:10
Also not a world class time but perhaps respectable.

And... It was surreal to see Ranger warm up for the race and then leave the venue while his race erg sat empty, exactly as he used to do years ago when I raced regularly in Cincinnati, Indianapolis, and Elkhart - and as he has apparently been doing all along.
Top

NavigationHazard wrote: ↑
February 18th, 2019, 9:17 pm
FISA and/or the race organizers in LB decided that the age categories for masters don't depend on birthdays: