From the CRASH-B's to an online challenge, discuss the competitive side of erging here.
Post Reply
1388 posts

Ouch saw that to. Sort of Brexit inside the uk

He's created a new ID "Rod Chinn." so I've editted that to "Rod Chinn (MAD)". The defection is probably documented on the Faceborgs website.
Top

Thank you for the interest chaps but there’s no drama or big story to tell;

It was purely for reasons of wanting to improve my performances as I think I’ll benefit from being with a small competitive group.

Since I moved into the 60-69 Lwt category nearly 2 years ago (I’m 62 in September) I’ve become a lot more competitive having set some records and won a few medals plus I’ve actually got faster in many events than I was as a younger and Hwt erger so keen to progress from here and taken on training with top coach Eddie Fletcher.

I’d found I was less able to contribute where I was for quite a while now as my own needs were taking precedence and was having less in common with the majority of the members than I had in the past so felt a move would be best for me as I head towards the world championships next February in Paris.

I’m also good friends with the MAD President Phil (‘’Sir Pirate’’) Morris as he lives about a 30 minute drive from me and we train together sometimes plus Eddie is in MAD.

I’ve left on good terms and all parties have wished each other well so all amicable and everything done properly.

Citroen, thank you for doing what I’m sure you thought was a help but I don’t like the look of it at all and was perfectly happy with the previous ‘dot’’ after my name to identify the new account so can I ask you to change it back to Rod Chinn. pretty pleeeze?

Thank you Lindsay that's kind of you to say, it's gone pretty well so far and I'm enjoying it.

I'll do it the other way round and mark your Sub7 ID with (SUB7).
I can't delete an ID that has ever added an entry for any challenge as that breaks the database.
Top

I clicked on the link to this thread from the CTC website and I couldn't understand why the email setting out this month's challenge was dated June 2016.

Then I realised we've come full circle, back to the first challenge posted on this thread. I presume the logic behind the challenge is in recognition of the different dating systems used on either side of the Altantic.
Top

Odd that military format (31 AUG 2019) is so little used considering the elimination of ambiguity by simple progression from short to long, clear distinction at a glance of numeric representation of dd from alphabetic representation of mmm. And no busywork with dots, dashes, slashes, commas.

There are 12 days per yr on which Brits and Yanks produce precisely the same notation using different formats and 11 days per month of possible confusion. Have a glorious 0208, 0802, 2 August or ???????? of your choosing.
There are two types of people in this world: Those who can extrapolate from incomplete data 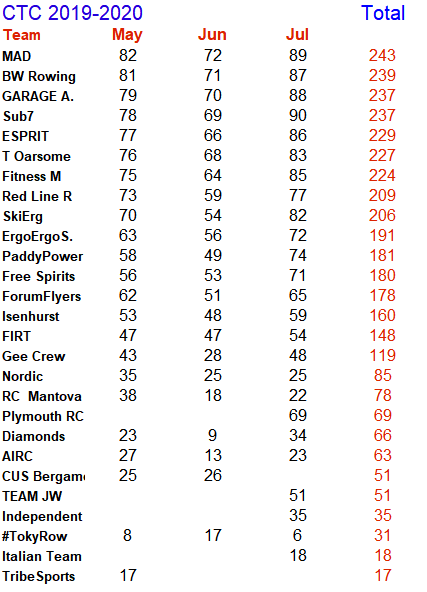 July saw a return to top form for SUB7. They finished on top of the leaderboard and, with 17 boats, launched the largest armada on the virtual river. Well done.
We also saw boats launched by Plymouth RC, TEAM JW and The Italian Team for the first time. Welcome.
AIRC and CUS Bergamo have both claimed a challenge so the coming months have -
September - Red Line Rowers
October - AIRC
November - CUS Bergamo
Regards,
Joe
Top

Can someone remove the score I just entered? I realized afterwards that the short intervals this month are 318m, not the 316 I'd programmed. Probably doesn't make more than a couple of tenths of a second difference in the overall time but I have way too much integrity to let it pass....

I will go again.